Like all other fields, we should be thankful to technological advances, which make the life of dentists and patients easier as both have now several choices when it comes to selecting materials to fill cavities. Among the choices are natural tooth-colored materials such as resin-based composite fillings and more traditional dental fillings such as those made of metal amalgam.

Usually people make quick decision and they have one for all approach. Such people will want to do everything at once and then sleep tight knowing that it’s all sorted out. But other have slightly different strategy, they usually pick the part of their mouth that is worst and in this way, they break the problem into sections, like They do the top right now, the bottom left next year, and so on.

It is usually recommended that replace your fillings in stages not all at once. You should replace the bigger ones first as these cause more problems. If you think of your jaw like a nut cracker, you have the hinge at the back, the forces on those molar teeth are eight times the force on the incisor teeth, so those molars are always under more load. The fillings in those teeth also tend to be bigger and better at hiding or decay or causing tooth cracks. 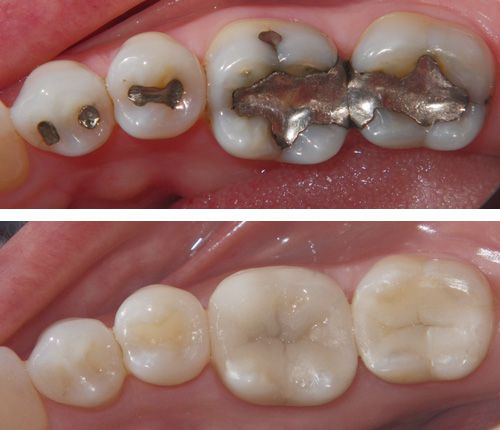 It can be said one of difficult situations while sitting with your dentist and discussing types of fillings that you can choose from. So by reading this article, you can make this decision bit easier.

Generally dental amalgams are recognized as silver fillings. Dental amalgam is a mixture of mercury, silver, tin and copper. Mercury, which makes up about 50 percent of the compound, is considered as main element that used to bind the metals together to provide a strong, hard, durable filling.

After years of research, mercury continues to be the only element that will bind these metals together in such a way that it can be easily manipulated to fill a cavity. Due to following reasons, Silver fillings are no more recommended:

Resin composite fillings are made of ceramic and plastic compounds, so they are also called white teeth fillings. These fillings mimic the appearance of natural teeth, therefore they are preferred to be used in front teeth for years.

In early days of white teeth fillings, these compounds weren’t strong enough to be used in back teeth, where high-pressure grinding and chewing require greater durability, but after a decade of research, now white teeth fillings is a great alternative for silver fillings. Now a days, white fillings is being preferred due to following characteristics: