Learn all about permanent and Essix/clear retainers. A retainer keeps your teeth in place after your braces come off. It takes almost a year for the periodontal ligaments to solidify into their new positions after your braces are removed.

Once your dentist has finished straightening your teeth, the retention phase of your treatment will begin. During this phase (which, at least in theory, can last the remainder of your life), you will be required to wear some type of dental retainers. This is true no matter what kind of braces or orthodontic system was used

Retainers are appliances used after headgear braces to maintain the results achieved and prevent any unwanted movement of the teeth. After treatment, especially in the first few months, teeth have a tendency to move back towards their original position. It usually takes somewhere between 3-4 months for new bone and gums to form and fully adapt around the new position of your teeth.

Most orthodontists tell their patients to wear their retainer 24/7 for a certain number of months, and then wear it only at night. After a few years, you could reduce that to a few nights per week. But don’t stop wearing it completely, or you may get an unpleasant surprise one day when you try to pop it back in, and it won’t fit anymore.

Retainers are fixed or removable and made of wires or plastic. Essix retainers are removable retainers that are made entirely of transparent plastic, which makes them less noticeable than traditional wire retainers. Another benefit is that they encourage good dental hygiene; patients can take out their retainer when they brush and floss, and clean the retainer itself at the same time. Unlike some wire retainers, Essix retainers cover the entire arch of the teeth. But like the traditional Hawley, each one is uniquely molded to the shape of the patient’s mouth. 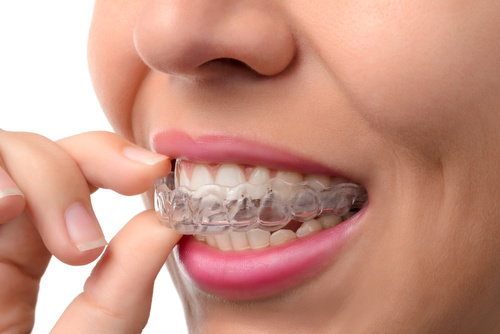 Retainers play a vital role in orthodontic treatment. They hold the teeth in the position where we placed them during treatment. Teeth have a natural tendency to move after treatment, particularly in the direction of their original position. This is called a relapse. Fixed retainers can sometimes break and come off. This may require you to see your orthodontist to get it glued back in place. Some orthodontists may charge a fee for this service. Clear retainers are not noticeable and if worn well hold the teeth very well. On the other hand, they can be worn through with heavy grinding or become distorted when exposed to heat.

Permanent retainers are made up of a semi flexible wire that is glued to the back side of teeth. It is usually placed in the lower front teeth, which are the first to move with time. They are also a popular choice to use between the upper two front teeth after having closed a gap (called a diastema), which is also very prone to relapse. The most common type of fixed dental retainer is a small wire that has been positioned on the backside of a patient’s lower front teeth (it’s sometimes referred to as a “lingual wire”).

The great advantage of bonded retainers is that the dentist does not have to rely on patient cooperation. Unlike removable retainers that may be misplaced or simply not worn, fixed appliances are always in place to perform their duty. Another nice advantage of permanent retainers is that due to their location on the backside of the teeth it’s very difficult for others to detect them.

Essix style orthodontic appliances are also sometimes referred to as “invisible” retainers because they’re made using clear plastic. They may also be referred to as “overlay” retainers because they fully cover over the teeth. They were first introduced in the early 1970’s. These are vacuum-formed appliances that are relatively simple to make. Many dentists fabricate them right in their own office. The clear acrylic is barely visible on the teeth, making Essix retainers a very esthetic option and very popular among adult patients. This will also usually increase patient compliance. These can be used as a mouth guard for patients that grind their teeth at night, using clear retainers that cover the biting surfaces of teeth can prevent them from the damages caused by teeth grinding.

Which Retainers are the better?

At Spillers Orthodontics, the preferred choice of retainer is the Essix clear removable retainers.
•    Clear, almost invisible, and easy to wear.
•    Cover the teeth and protect the teeth from shifting.
•    Easy to clean since you can remove retainers to brush and floss.
•    Can help protect dental restorations (fillings, crowns, etc.) if patient grinds or clenches teeth.
•    Can be used as a bleaching tray. Patients can purchase bleaching gel from their general dentist to use inside their retainers to help whiten teeth after treatment.
•    Give the patient the ability to wear full-time to move teeth back into finished position if patient went a couple of days without retainers and teeth shifted slightly.